“We do more more than just play drums,” says Tony Cerniglia when asked about the instrumentation on the debut album by the Midnite Rum Orchestra, his project with Cubby Tracy. The two are no strangers to each other. Tracy managed Seventeen Rhinos, a highly successful band that included Cerniglia and Tracy’s son Shane.

Someone could write a book about these two and their illustrious music careers and, truth be told, I’d consider it. Tracy is part of Wisconsin rock and roll folklore as it emerged from the cocoon of the 60’s and got serious about taking flight. He and his brother Steve formed Clicker whose ranks also included another Madison legend, Richard Wiegel (great historical comments in this post). Clicker released two albums, an eponymous debut in 1973 recorded at American Music (see Jim Kirschstein’s Cuca records) that was produced by Jonathan Little and released on the Hemisphere label; and Harde-Har-Har-Har, released on Clicker Records in 1975. Clicker played its last gig in 1978.

Clicker in 1978 after singer Gregg Clemons joined the band:

Cerniglia, of course, played – and still plays – in another legendary band, Chaser. The band reformed a few years ago complete with the ageless, Bowie/Jagger-esque Mike Massey and original guitarist Mike Ripp. Ripp’s brother Jim occupies the bassist chair vacated by one Steve Johnson (who also played in Seventeen Rhinos. See? One needs an appendix – to a book that is. Chaser was a hair away from the big time, L.A. style in the decade of our rock lord, the seventies. Chaser members went on to form Boys in White and Stop the Clock.

The reformed Chaser playing their regional hit “Camp it Up” at the Barrymore:

A somewhat comprehensive overview of Massey, Chaser and Boys in White written by yours truly:
http://www.mikemasseymusic.com/RicksCafe-July04.pdf

Though both bands saw success to certain degrees, their respective stories could inform today’s upstarts about what not to do.

Apparently the Midnite Rum Orchestra was conceived on a beach in Jamaica while enjoying libations – likely around midnight and likely involving rum. The two drummers realized they had considerable ideas and a few unfinished songs. Things went from there.

Cerniglia and Tracy play all the instruments on Voodoo Shakedown proving that, yes, they do way more than just play drums. Cerniglia did the lead vocals and most of the backups. One of the remarkable things about the recording is the strength of the vocals and the multiple harmonies applied to some really memorable choruses. Voodoo Shakedown isn’t flashy – there are few solos and the songs stick to traditional pop formats for the most part but MRO succeeds in taking an old-school approach and making it sound fresh, with fat tones and strong arrangements. Some things may sound vaguely familiar: the nod to the Beatles in the opening of “Beautiful Day,” for instance. The album never gets derivative, however. It’s just good singin’ and good playin’ with ample melodic hooks.

“Uncle Salty,” penned by Cerniglia, is a mid-tempo power-pop rocker – like Badfinger crossed with UFO. Crunchy guitars and a big refrain.  “No Promises” follows; a simple, somewhat familiar piano figure and vocal melody. The power ballad structure reminiscent of Big Star, Bon Jovi or anything in-between gives way to a searing, short-but-sweet guitar solo and then a brilliant coda.

Lyrically the album is diverse but several of the songs address current societal issues, particularly the divisiveness that is running rampant. This gets addressed right off the bat in the opener “All the Same,” a clarion call to recognize the fundamental truths that underlie commonality. “If we’re going to change the world / It’ll take every woman, every man / the truth lies in what makes us different / The secret lies in what makes us all the same.”  The commentary gets most direct on “Only a Fool,” which seems aimed at a certain political figure whose name will not be uttered here. “Two steps backward yet forwards in time / You keep crossing the line / Fear as my witness, no joy can I find / Only a fool believes lies.” Cerniglia delivers an effective spoken-word bridge that approaches rap. “America,” then, might be what you would expect by this point; a savage observation of our country’s ills. They pull this off with more near-spoken word verses set to a funky, rock guitar bed. If you’re on the wrong side of history right now you may be offended. This is a great tune with a killer twin-guitar solo right out of the Wishbone Ash catalog. The commentary shifts to utopic idealism on “Beautiful Day,” the aforementioned Beatle-esque opening section underpins the sunny vision of what the world could – should – be like. Cerniglia’s vocals are especially strong and earnest here. The song crosses decades of musical influence in a truly ingenious arrangement. The reverb treatment on the snare drum is way cool, the harmonies on the chorus huge.

The title track "Voodoo Shakedown" again uses spoken-word verses, the music effectively creating a Peter-Gunn-ish, voodoo vibe. Things veer toward the acoustic side on two tracks. “Pocketful of Miracles” a nod to both “Wish You Were Here” and “Amy.” It’s another strong vocal performance with ample harmonies. “Money Bags” breaks the mold with its use of triggered horn sounds in jaunty, McCartney-esque fashion and to good effect.  The final track, “Did I Love,” sounds a bit out of place here, a love ballad heavy on the keys that harkens back to the Eighties and features vocals by Brianna Hardyman.

The Midnite Rum Orchestra is by all appearances carrying on, with two new songs posted to their website. “Better World” employs a reggae/rock vibe and commentary more familiar to Voodoo Shakedown.  “Can’t Keep Losing” is power-rocker ear candy that could have fit on Queensryche’s Empire album, a reference that is somewhat applicable to a lot of Voodoo Shakedown.

New music by these two should be a big deal but, like most things, it’s extremely difficult to break through the noise that is dominating life as an American right now. Which makes Voodoo Shakedown all that more relevant and a candid snapshot of 2020, a year that will surely go down in the annals of history as one of this country’s darkest. It also lends credence to the power of music to congeal the mindset that is in disarray. Lastly, it’s just so great to see Cubby Tracy being active; happily making music after a lifetime of challenges, successes and probably plenty of heartbreak and betrayals in an industry built on those pillars. The same could probably be said for Cerniglia. It’s the type of perseverance and courage that suggests hope; that we will find the strength to rise out of our current state of affairs. 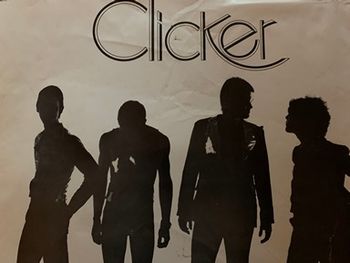 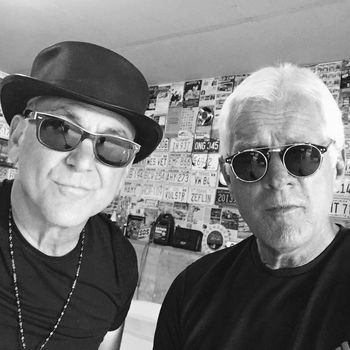 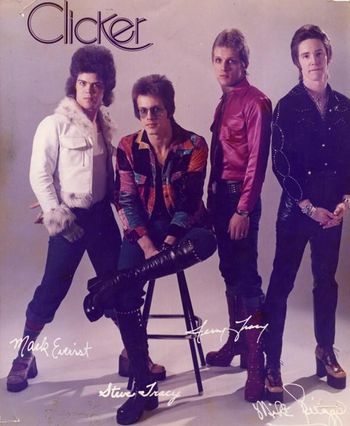 Clicker as a four-piece 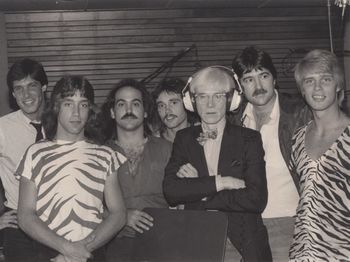 Chaser with Andy Warhol. From the band’s Facebook page. 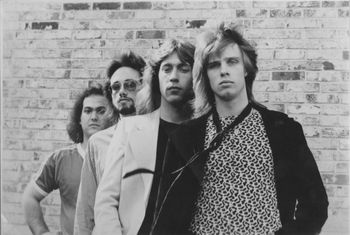 ABOUT THE AUTHOR - Rick Tvedt